The impact of our animal research

Eradication of rinderpest – the first animal virus to be eliminated 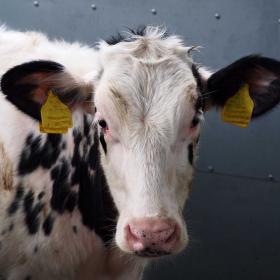 Rinderpest was for centuries the most economically devastating of all cattle diseases. Caused by a virus closely related to measles virus, the disease was highly infectious and resulted in very high mortality (80-90%). The economic impact was estimated at US$1 billion per year in Africa alone.

Various national and regional control programmes in Africa and Asia took place in the 1970s and 1980s, and in the early 1990s rinderpest became the focus of a worldwide initiative to eliminate the virus from the wild, coordinated by the Food and Agriculture Organisation (FAO) and the World Organisation for Animal Health (OIE). In October 2010 the completion of the programme was announced by the FAO, and the disease was declared officially eradicated in the following year – making it only the second viral disease (after smallpox in 1979) to be eradicated.

The Institute became the FAO’s World Reference Laboratory (WRL) for rinderpest in 1994, and several scientists played important roles in rinderpest eradication. Not least was Walter Plowright (d.2010), who, whilst working in Kenya, developed the safe, effective rinderpest vaccine that was used in most countries during the eradication campaign.

Bluetongue virus infects many ruminants, although sheep are the most badly affected of livestock. The virus grows in the linings of blood vessels and the resultant damage leads to leakage of body fluids. This in turn leads to many clinical effects including airways becoming full of liquid and froth, excessive salivation, swelling of the head and occasional swelling of the tongue (which can turn blue, hence the name of the disease). Up to 30% of sheep that develop clinical signs die.

The Institute played a pivotal role in the eradication of bluetongue virus following its first arrival in England in 2007, providing a unique array of experts for rapid and highly accurate diagnosis, and to advise Defra, the European Food Safety Authority, OIE (the World Organisation for Animal Health), British farmers and pharmaceutical companies on a successful strategy for defeating the disease. This was based on virus surveillance and the development and targeted deployment of a new vaccine.

Thanks to a high take up of vaccination by farmers, especially in southern counties of England and Wales, there was no incidence of bluetongue in British livestock in 2008 or since. An independent assessment concluded that bluetongue research at the Institute saved £485 million and 10,000 jobs.

Researchers have created a new method of genetically modifying the Marek's disease vaccine so it can protect against another destructive poultry virus - infectious bursal disease (IBD) - and potentially others such as avian influenza and Newcastle disease. This approach could lead to a reduction in the number of vaccines given to birds.

Using a gene editing system called CRISPR/Cas9 to add a gene of the IBD virus into a current Marek's disease vaccine virus, scientists were able to add genetic material that could protect poultry against IBD adding to the protection already offered by the Marek's disease vaccine, meaning that bird owners would only need to use one vaccine instead of two.

Pirbright intends to partner with vaccine manufacturing companies to bring CRISPR/Cas9 edited vaccines to market due to strong commerical interest.

Expert geneticists from Pirbright have sequenced the entire genetic code of the goat, which is the most complete produced for any mammal to date. They used a combination of techniques in parallel, an approach which could revolutionise the process of genome sequencing and assembly for other species and help scientists further undertsand the relationship between genetics and disease.

The team has since used the data to identify the position and function of the goat genes that are responsible for anitbody production. The variety of antibodies expressed by any given individual is immensely diverse and influenced by vaccination and infection. By knowing the genetic sequence responsible for antibody production, scientists can better understand how animals are able to respond to disease.