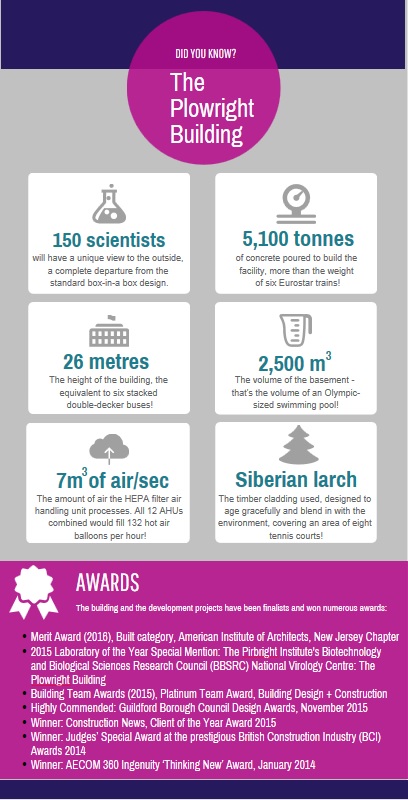 The BBSRC National Virology Centre: The Plowright Building became fully operational in April 2015 and is the culmination of £145m investment to develop a new containment laboratory for research of exotic viruses.  The 14,000m2 laboratory and associated facilities houses some 160 staff, including 125 scientists, and is essential to underpin the Institute’s two scientific programmes for the purposes of in vitro research into virus diseases of livestock, including poultry, as a flagship component of BBSRC research in the area of viral diseases.

"First-of-its-kind facility....putting people at the center"

Unique in the UK, The Plowright Building provides the ability to carry out internationally excellent research on viruses safely at the highest level of containment.  It is a Category 4 bio-containment facility – designed to ensure that no virus can get out, and to prevent cross-contamination within the facility itself.  With three international reference labs for ten exotic viral diseases of livestock at its core, the pathogens that Pirbright studies include some of the most contagious viruses known, as well as economically significant viruses such as foot-and-mouth disease virus (FMDV), bluetongue virus (BTV), peste de petits ruminants virus (PPRV) and African swine fever virus (ASFV).  Its infrastructure allows safe working at the highest national and international regulatory standards.

"A radical departure from the traditional bunker-like containment facilities.."

Delivering this "first-of-its-kind facility", Lindsay Hock, editor of R&D Magazine, describes how the design team took the conventional box-inside-a-box design for containment and pulled it inside-out.  Instead of the virus – or the labs – buried in the center, the design team put people at the center.  The new model includes a central light-filled atrium, with zones with containment surrounding it.  The curtain wall of the atrium defines a containment boundary that is sealed.  A radical departure from traditional bunker-like Category 4 containment facilities, this new model is safer, enhances research productivity and is exponentially more comfortable and pleasant for researchers and staff, and aligns with the worldwide trend towards multidisciplinary collaborative science. 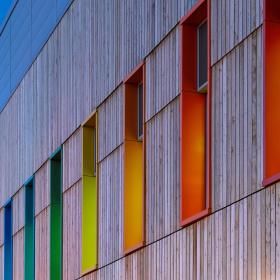 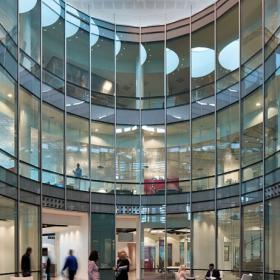 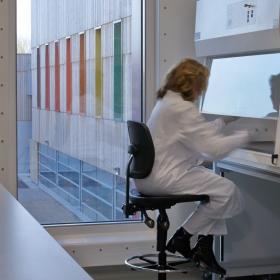 View of the outside from inside containment. Image: © James Brittain, courtesy HDR Architecture 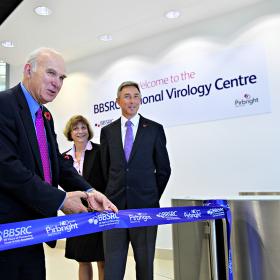