Home » Our science » Animals in research » Annual return of procedures

The Pirbright Institute is committed to the highest standards of animal care and welfare. Our scientists are committed to the principles of the 3Rs: reduction (in numbers), refinement (of procedures) and replacement (with laboratory procedures) of animals. The 3Rs is central to the Institute’s values and we take seriously our responsibility to ensure that experiments are designed with the aim of avoiding the use of animals wherever possible whilst ensuring that we produce results that are of benefit to animal health and welfare in the longer term.

The impact of the work carried out by the Institute in improving the welfare of livestock in the UK and overseas is considerable. Therefore the proportionate use of animals is an integral and necessary part of the research that leads to the development of useful veterinary vaccines and diagnostics. These safeguard the wellbeing of countless livestock and the livelihoods of their owners. 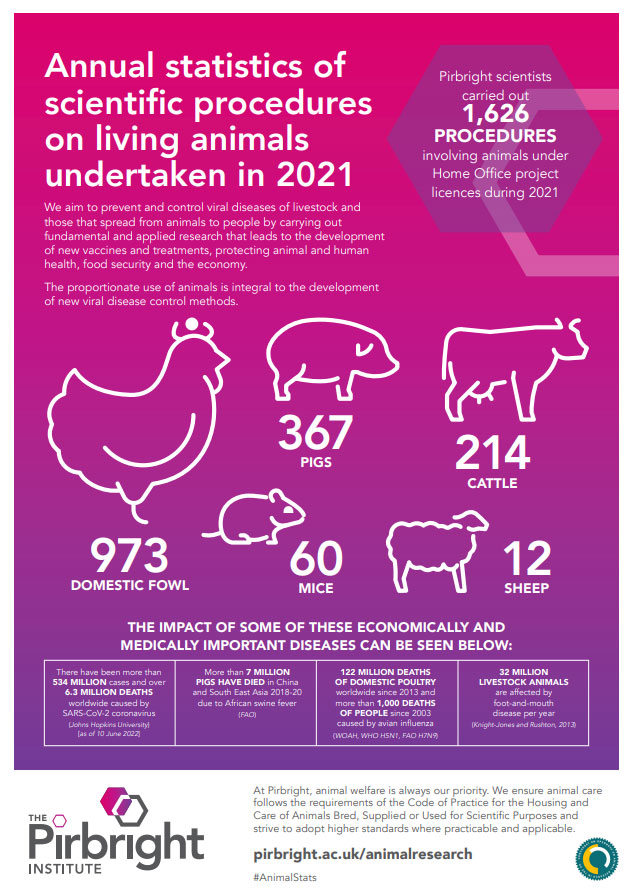 It is illegal to use animals if there are alternative non-animal methods available and the expected benefits resulting from the research must outweigh any potential animal suffering. The Pirbright Institute makes every attempt to minimise the number of animals used and animals are only used when no alternatives exist.

ASPA requires extensive project evaluation, taking into consideration ethical implications associated with the use of animals in scientific research. All programmes of work are evaluated to ensure that the programme of work has sound scientific benefits. A harm-benefit analysis is also undertaken to assess whether the harm that would be caused to animals – in terms of pain, suffering or distress – is justified by the outcome, taking into account ethical considerations and the expected benefit to human beings, animals or the environment.

Each year, the Home Office produce an annual report which provides the statistics on scientific procedures on living animals. These figures are collected from each Establishment and published on the Home Office website.

The number of procedures undertaken each year will fluctuate according to global viral outbreaks, strategic and economic decisions by government and investment by funding bodies etc. However the 3Rs is central to the Institute’s values and we take seriously our responsibility to ensure that experiments are designed with the aim of avoiding the use of animals wherever possible whilst ensuring that we produce results that are of benefit to animal health and welfare in the longer term. Specialist statistical advice is always sought when designing new experimental studies.

Total number of procedures per year

In the UK, all regulated procedures undertaken on animals under the Animals (Scientific Procedures) Act 1986 (ASPA) must have the ‘actual severity’ recorded which the animal has experienced throughout the course of its experimental life, and reported to the Home Office on an annual basis.

Using those figures collected from each establishment, the Home Office produce an annual report which provides the statistics on scientific procedures on animals. These figures are published on the Home Office website.

Actual severity must reflect the highest severity of the procedure, including where the use of several lower severity procedures together or sequentially results in a higher level of severity accumulation of lesser events. The actual severity assessment is based on the real (not predicted) impact (harms).

At Pirbright, this is achieved through a ‘team approach’ by incorporating the expertise of researchers, veterinarians and animal technicians to ensure suitable welfare assessments are in place, reviewed and revised when necessary, and clearly understood by all those responsible for monitoring the animals. Our Project Licences have practicable and realistic humane end points which are rigorously applied; and we take all reasonable steps to ensure that animals do not exceed the severity limit in the Project Licence.

Descriptions of the severity categories can be found on the tabs below.

Research at the Institute may include studies designed to characterise and understand the course of a virus infection, with the view to develop vaccines or other treatments. The clinical signs of disease to be observed would be specific to the virus but could include a fever, weight loss and behavioural changes over a specified timeframe leading to the severe category. In these studies, the frequency of inspection is increased and the animals are very closely monitored by our staff to ensure that they do not exceed the humane end points agreed within the Project Licence.

Given the infectious nature of the viruses we work with, it is not possible to sell animals back into the national herd or to privately rehome them at the end of the studies. They are therefore euthanised by a trained and competent member of staff using an appropriate method.

The severity classification of procedures at the Institute varies from year to year depending on the research that is undertaken. Wherever possible, the fullest use of outcomes and techniques are shared including the supply of results, materials and samples to various interested parties, internally and externally, to accommodate their research needs and objectives and to promote the value of collaborative research by optimising reduction, replacement and refinement strategies, known as the 3Rs. Find out about about Pirbright's approach to the 3Rs.

As part of The Pirbright Institute’s commitment to openness and transparency, the severity categories of animals used in research are published in the tables below.

Outlined here are the figures for Pirbright, as well as the measures taken to ensure that animals used in research are done so to the fullest extent. Reporting requirements in the EU Directive (2010/63/EU) require that every 5 years each EU country must submit the number of animals that are humanely killed in research facilities licenced under ASPA without being used in any regulated procedures. Examples of why this may happen include:

How many animals were reported in the Additional Animal Statistics by The Pirbright Institute?

Why are these Statistics not counted in the Home Office Annual Returns?

The Home Office Annual Returns detail the number of animal uses under a Project Licence. The numbers captured represent all animals which have undergone regulated procedures. A regulated procedure is one which is carried out on a protected animal for a scientific or educational purpose and may cause that animal a level of pain, suffering, distress or lasting harm equal to or above that of an injection according to good veterinary practice. Animals that make up the Additional Animal Statistics do not undergo any regulated procedures, and are thus never captured in the Annual Returns.

Why is The Pirbright Institute providing this information now?

Pirbright makes every effort for transparency in animal research and has a dedicated animals in research section on the corporate website. 2017 is the first year that the Government has requested additional animal statistics (in accordance with Directive 2010/63/EU) and as such Pirbright is providing these figures to respond to this request. As the Directive only requires this data every five years it is unclear whether such information will be requested in the future.

What was the experience of the animals reported by The Pirbright Institute in the Additional Animal Statistics?

The Pirbright Institute reported 518 domestic fowl (chickens) and 28 pigs in the Additional Animal Statistics for 2017.

The chickens lived within a laboratory environment from hatch, subject to the Code of Practice, with access to food, water and veterinary care. They were all humanely killed using an EU-approved Schedule 1 method.

Whilst blood and tissues were collected for use in scientific research from the majority of these birds, some chickens were culled due to excess between hatch and supply. However the Institute is continually striving to reduce the number of excess hatched birds. Fertility, the percentage of incubated embryos that are fertile, and hatchability rates, the percentage of fertile eggs which go on to hatch, are regularly reviewed.  Embryonated eggs are carefully monitored to study the fertility, growth and development of an embryo during incubation.

The pigs, bred at a commercial farm or licenced Establishment, were humanely killed using an EU-approved Schedule 1 method upon arriving at The Pirbright Institute. Blood, tissues and body fluids were then collected and used in scientific research.

How do animals not used in any regulated procedures contribute to research?

Animals killed for blood or tissue samples directly contribute to and are required for the Institute’s scientific research. For example, animal tissues such as kidney, trachea, spleen, femur, are used to prepare organ cultures which enable our researchers to measure and characterise virus replication and interactions within the host cells, red blood cells are used to assess virus concentration and white blood cells are used to investigate the immune system and responses to viral infection.  The use of blood, tissues and body fluids provides the Institute’s researchers with an alternative method of studying cells and organs in a controlled setting. They also contribute towards replacing the need to use living animals in procedures through the development of cell-based, in vitro or ex vivo, laboratory techniques, which is vital in Pirbright’s efforts to apply the principles of the 3Rs: Reduction (in numbers), Refinement (of procedures) and Replacement (with laboratory procedures).

Where can I find the statistics for the UK?

The Home Office have published a detailed report summarising the figures.