A major new study, featured on the cover of Science Magazine today (1 October 2021), undertaken by scientists at The Pirbright Institute, Oregon State University, Onderstepoort Veterinary Institute and SANParks, Veterinary Wildlife Services, Kruger National Park explores the mechanisms at play that enable the persistence of highly infectious pathogens in their host populations, a major problem in endemic disease ecology. The research focused on highly contagious foot-and-mouth disease viruses (FMDV) persistence in their wildlife reservoir, African buffalo. Foot-and-mouth disease (FMD) is endemic in many low-middle income countries creating an economic burden and threatening food security. FMD does not cause disease in buffalo, but in cloven-footed animals like cattle it causes painful blisters on the mouth and feet resulting in weight loss and reduction in milk yield.

To solve the puzzle of how some contagious diseases are able to persist and continue circulating in a population long after an initial outbreak when the disease first burns through a pool of susceptible hosts, scientists set up experiments in the field to investigate the transmission of three main strains of FMDV (SAT1, SAT2 and SAT3) in buffalo herds in South Africa’s Kruger National Park. Researchers sampled blood and tissue from a wild herd at two monthly intervals over a period of three years to test for FMDV while simultaneously recording infection dynamics in a captive group of experimentally infected buffalo over a six month period. 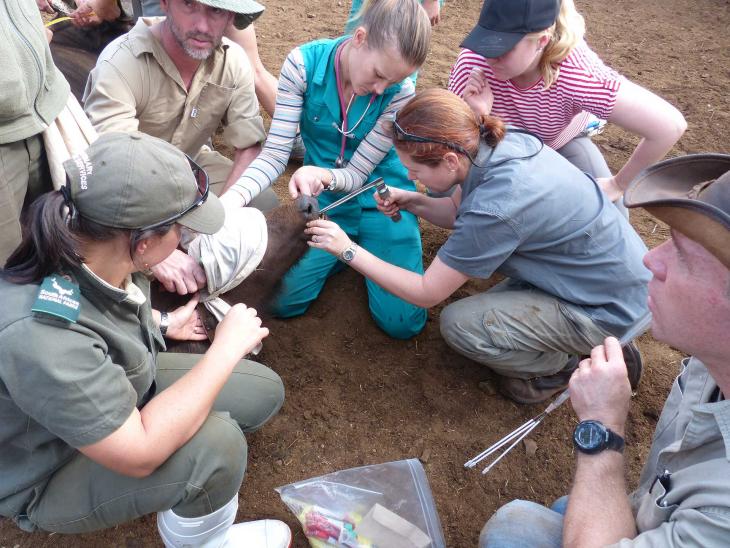 Taking samples from buffalo in the field © The Pirbright Institute

The aim was to work out what the virus was doing in between outbreaks and how it was able to maintain itself in a population once the initial ‘wildfire’ infection was over. FMDV is extremely contagious and able to infect entire buffalo populations in areas where it is circulating, providing some level of immunity in young animals. This immunity wanes considerably at around 4-6 months of age when young calves lose their maternally-derived antibodies making them susceptible to infection. The researchers therefore focused on this primary path of transmission in the study as well as investigating a second transmission route via carrier animals, which was thought to be a less effective transmission route but a potential factor in preventing FMDV fade out between successive calving seasons.

The experimental challenge study was designed to measure the epidemiological parameters for FMDV transmission in buffalo during primary (acute) infection and from carrier hosts for each of the three strains. To assess primary transmission four naïve buffalo were allowed contact with four animals experimentally infected with one of the three FMDV strains being tested, a total of 12 naïve and 12 infected animals which were observed over 30 days. In the carrier buffalo study, transmission was assessed by monitoring two groups of buffalo, each group containing two carriers for each strain (6 buffalo) along with 6 naïve buffalo.

In the primary transmission group all naïve animals became infected and became carriers. Unlike previous studies the researchers were able to show that carrier transmission does occur, but at a rate that was considerably lower than in primary infection. Importantly, both the direct and carrier transmission rates differed amongst the three strains.

Based on the results of the experiments, scientists used mathematical models to establish that none of the strains would be able to persist in populations from one birthing season to another if the buffalo didn’t become carriers and therefore ‘childhood infection’ alone is not sufficient to explain how the virus becomes endemic. However, when carrier transmission was included in the models, SAT 1 and SAT 3 were able to persist in buffalo, even in small populations of around 2000 animals. Conversely, although SAT 2 spreads efficiently in acute infections, it performs less well in carrier transmission and was not able to persist in small populations.