On Saturday 17 March 2018, Pirbright’s team of Bug Busters were at Innovate Guildford showcasing the Institute’s research on genetic engineering and how the technology can be used help fight devastating diseases spread by mosquitoes.

Innovate Guildford is a science and arts festival promoting the work of pioneering organisations that are right on Guildford’s doorstep. Companies majoring in science, technology, engineering and maths subjects (STEM) joined forces with those championing the arts to inspire young and old, and demonstrate how the two areas are closely linked.

Visitors of all ages took on Pirbright’s new ‘Bug Busters’ Lego mosquito challenge, which helped to explain how CRISPR gene editing works. Our researchers guided visitors through a series of instructions on a Lego DNA helix, to build a Lego mosquito. If some of those instructions were altered using the CRISPR gene editing tool, the completed mosquito would be modified. Many visitors commented on how the novel interactive was a great way to show how editing the genetic make-up of a mosquito changes its characteristics, and how this is can be used to prevent the spread of diseases. 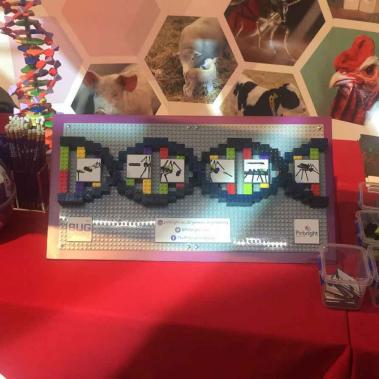 The Bug Buster opinion poll gauged the public’s views on the best way of preventing mosquitoes from spreading disease, using gene editing techniques.  Visitors had to rank three choices in order of importance and  ‘stop mosquitoes from carrying diseases’ came out on top, followed by ‘altering how they feed’ and then ‘prevent mosquitoes from reproducing’.

Pirbright’s Professor Luke Alphey discussed the technology with a full and varied audience in The Glass Room. Luke opened his talk by posing the question ‘What is the world’s most dangerous animal?’ with the answer ‘mosquito’ setting the scene. The remainder of the talk followed Luke and his team’s work, and how cutting-edge gene editing technologies such as CRISPR can be used to stop mosquitoes spreading diseases.

Even with the freezing conditions and snow, Innovate Guildford 2018 was a huge success, and Pirbright was proud to be there showcasing its local scientific research and enthusing people of all ages. If you missed us this time, Bug Busters will also be at Cheltenham Science Festival in June, so visit us there to join in!

See our animation on how CRISPR works and download the Bug Busters leaflet.