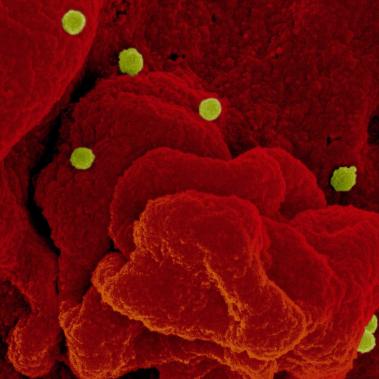 Crimean-Congo Hemorrhagic Fever (CCHF). Image credit NIAID
Zoonotic diseases are infections caused by viruses, bacteria and parasites that spread between animals and people. They can make people and animals very sick, and can be fatal. Pirbright scientists study viral zoonotic diseases to try and find ways to stop them spreading.

Zoonoses affect a wide range of species and have a huge impact on animal and human health, as well as food and economic security. At Pirbright we study viral zoonoses, the insects that spread these diseases (known as vectors) and we develop vaccines to control them.

Viral zoonoses are spread directly through contact with saliva, blood, urine or other bodily fluids of an infected animal, by airborne means (influenza) or indirectly (vector borne) via bites from a tick or an insect, for example such as a flea or mosquito (Zika).

In 2018 the World Health Organization (WHO) released a list of priority diseases based on their potential to become pandemic and the lack of robust control measures. All ten diseases on the list are caused by viral zoonoses. These include diseases like Crimean-Congo haemorrhagic fever (CCHF), Ebola, Nipah, Rift Valley fever, Zika and Disease X.

In light of the recent pandemic, COVID-19, which is casued by SARS-CoV-2, has also been added to the list..

What is Pirbright doing?

Pirbright scientists have recently added their expertise to the global research effort in order to tackle the COVID-19 pandemic. This zoonotic disease is caused by the severe acute respiratory syndrome coronavirus 2 (SARS-CoV-2), which is thought to have originated in bats. It is expected that there will have been an intermediate host between bats and humans, although which species is currently unknown. Our researchers are testing human COVID-19 vaccines in pigs to understand the immune responses that are generated, as well as investigating the virus to establish how it replicates and which animal cells it can enter.

For more information about this research, visit our Coronavirus Hub.

Scientists are developing several different vaccines that will protect livestock from zoonoses, and so help prevent these animals from transmitting the viruses to humans. We are collaborating internationally to produce an inexpensive, safe and effective vaccine to protect pigs against Nipah.

To combat Crimean-Congo haemorrhagic fever virus (CCHFV), researchers conducted a series of field studies to better understand potential animal, farm and environmental factors associated with exposure to CCHFV in sheep. Samples and data collected as part of a field vaccine trial, to assess if a vaccine developed by Public Health England prevents infection in sheep, are currently being analysed. Working in collaboration with researchers at The Jenner Institute, a DIVA test has been developed to distinguish between wild type and vaccine-induced antibodies. Overall results from these field studies will allow us to get a better understanding of the complex dynamics between livestock, management practices and environmental factors and their potential role in CCHF transmission and risk for human exposure.

Our scientists are also developing a new universal vaccine to protect against all strains of influenza virus. This is extremely challenging due to the number of strains of flu virus circulating and the emergence of new strains. Pirbright have been using a pig model to test an S-FLU aerosol vaccine, developed by Alain Townsend at Oxford. The pig immune and respiratory systems are very similar to humans so may provide a better model for infection and vaccination studies.

Mosquitoes carry and transmit many deadly diseases that result in millions of deaths. We are studying the ability of European mosquitoes to transmit RVF virus as well as understanding how susceptible European livestock breeds are to the disease. This will reveal how big a threat RVF poses in Europe and enable us to predict how an outbreak may spread. We are also exploring ways in which genetically modified (GM) mosquitoes could be used to control populations and help prevent the spread of zoonoses. Modifying male Aedes mosquitoes to produce sterile offspring enables targeted suppression of the population. These methods could be employed to tackle a variety of insect borne diseases such as RVF, Zika and malaria. We use the latest GM techniques for controlling mosquito-spread diseases, including CRISPR/Cas9 and gene drives that only control populations locally.

Predicting where the next virus will emerge from, or how an existing virus might mutate to transmit between animals or humans more efficiently, is a crucial part of disease control. Pirbright scientists use complex mathematical modelling incorporating data from the Met Office to investigate how weather patterns influence the movement and transmission of diseases. This provides valuable insight into how some airborne diseases may interact with the atmosphere and the movement of vectors that transmit disease.

The role of climate change

Rising temperatures across Europe are one of the driving forces that allows diseases to travel further north from southern Europe and Africa. The insect vectors that carry these diseases are then able to survive at higher latitudes for longer, increasing their ability to spread disease. Hyalomma ticks, the vector for CCHF, are highly adapted to warm and dry conditions and if these conditions become more widespread populations of these ticks are likely to become established, bringing with them the risk of CCHF to humans. UK ticks are unable to transmit CCHF to humans, but a changing climate could increase the risk of Hyalomma ticks moving and living further north. Migratory birds and horses can transport the tick into new areas and by 2080 the conditions may be warm enough for them to survive in the UK