In a scientific editorial* in Veterinary Record to be published on 1st July 2011, top researchers have said that the Food and Agriculture Organization (FAO) and the World Organisation for Animal Health (OIE) should focus on peste des petits ruminants (PPR) virus as the next livestock virus for eradication. PPR virus, which is a close relative of the recently eradicated rinderpest virus of cattle, affects sheep and goats. In the same issue, Dr Michael Baron and colleagues of the BBSRC’s Institute for Animal Health have briefly reviewed** the disease. Dr Baron, recently confirmed by the OIE as an OIE Expert on Rinderpest and Peste des Petits Ruminants, said “PPR is without doubt the fastest growing and potentially the most economically important disease of sheep and goats anywhere in the developing world.” 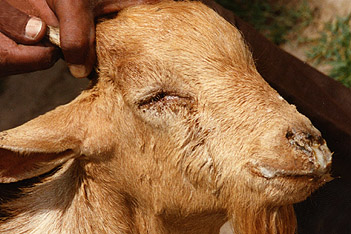 PPR is circulating on the edges of the European Union (EU), including on the southern shores of the Mediterranean; there were outbreaks in Morocco and Tunisia in 2008 and there is evidence for its presence in Algerian sheep this year. In addition, it has been present in Turkey for many years.

Sheep and goats play an integral role in sustainable agriculture and development in Africa and Asia, where PPR has extended its range alarmingly during the last decade. Sheep and goats suffer mortality ranging from 10% to 90%, depending on age, breed and secondary infectious agents. They exhibit diarrhoea, bronchopneumonia, fever, congestion of eyes, nose and mouth, with copious discharges, followed by necrotic lesions, which lead to cessation of eating. Animals become anorexic, milk yield is reduced, and abortion is likely. A transient loss of white blood cells leads to secondary infections, which further worsen the condition of the animal, which can die as a result. Cattle can be infected with PPR virus but do not get sick.

PPR virus shares a number of properties with rinderpest virus that contributed to the successful campaign to eradicate the latter: a safe and reliable vaccine; the availability of simple and effective diagnostic tests; a short infectious period, with no carrier/persistent state; transmission only by close contact; and an economic incentive to eradicate it. "That's not to say that we couldn’t make some improvements," says Michael Baron. There was not for rinderpest, and is not for PPR, a DIVA vaccine – one that allows Distinguishing of Infected from Vaccinated Animals. “Consequently,” says Dr Baron, “it was never possible to keep scanning for disease by antibody detection whilst vaccination against rinderpest was going on, as the antibodies induced by vaccine and virulent virus were essentially indistinguishable.” Dr Baron is working on a ‘smart’ vaccine for PPR, one that leaves an antibody signature different from that created by infection with virulent virus, so that animals that have been vaccinated won’t be mistaken for animals that have been infected by virulent virus, and vice versa. This approach is key to modern vaccination campaigns. 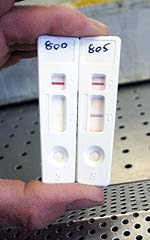 Dr Baron is also working on a ‘dip stick’ test for PPR virus, similar to the one developed by IAH for the closing years of the Global Rinderpest Eradication Programme. Using the same technology as a pregnancy test, the PPR dip stick would be sufficiently robust and simple to be used in the field, enabling on-the-spot virus detection without the need for lengthy journeys to diagnostic centres.

"There are good reasons to believe that the eradication of PPR is an achievable goal like rinderpest," states an FAO document of 2009. “It is possible, therefore,” says Dr Baron, “that the other elements necessary for an eradication programme – the commitment of national and international bodies to a co-ordinated approach and to the effort needed in surveillance and monitoring over a 10 to 20 year period - may be falling into place."

Video. You can see a video of Michael Baron talking about PPR on You Tube.