Enlightenment Science in the 21st Century – Bioimaging comes into its own

When microscopy had its first heyday in the 17th Century, it opened up a new world of cells, plant structures and the complexity of human physiology; the microscope led the discoveries and sparked a revolution in science. Now is the time that bioimaging is having, perhaps, a second bite at the Enlightenment cherry. Where, in the past, we have relied on biochemistry, biophysics and cell biology to answer questions about the lifecycles of viruses, we are now in a position to go directly to an animal cell and look inside at what is happening in powerful detail.

The Institute is unique in the UK as a facility where the most serious viruses affecting farm animals can be studied both in the lab and in the animals. This enables a holistic approach to interrogating the route of transmission, infection and propagation of viruses (including foot-and-mouth disease virus, Marek’s diseases virus, bluetongue virus as well as African swine fever virus and many more besides). Bioimaging is a core facility with collaborations across all three of the Institute’s research programmes enabling both fundamental and applied research as well as driving research in its own right. 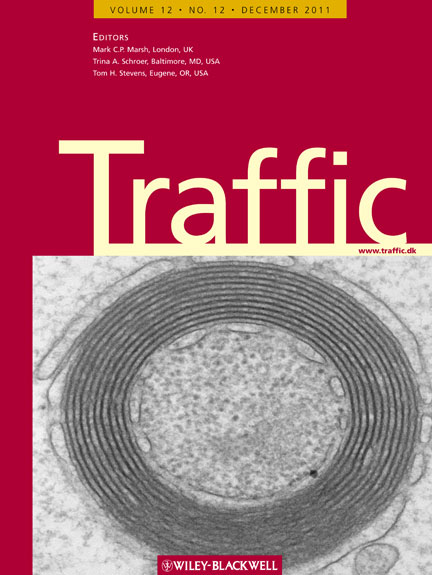 The front cover of Traffic opposite shows concentric rings, worthy of a tree trunk cross section and reminiscent of the liquorice sweets of childhood; an image perhaps so sharp that it belies the scale at which we can view the tiny membrane stacks of a cellular structure called smooth endoplasmic reticulum (ER). This image, which shows a structure around 100 times smaller than the width of a human hair, was produced at the Institute using a transmission electron microscope – a sophisticated instrument that uses electrons instead of light to create a high resolution image of a sample.

This, however, is not smooth ER in a normal cell. In fact, the structure shown here formed as a consequence of the presence of a protein from African swine fever virus (Windsor et al. 2012 Traffic 13). This virus uses cellular membranes to make new viruses, which then disperse throughout the host animal and go on to spread quickly throughout a pig population. African swine fever is no attack of the sniffles! For a domestic pig it is a likely death sentence, often causing major internal haemorrhage.

At the Institute microscopy is mostly used to investigate basic research questions. The results of this research can be picked up by other scientists and used in the development of vaccines which help livestock industries in the UK and abroad.

Recently, microscopy has been used to identify the mechanism of entry of bluetongue virus into host cells in culture. Gold et al. (2010 PLoS ONE 5:6) used various markers and inhibitory drugs to image virus going into cells at early time points. Using the confocal microscope allowed the researchers to co-localise virus with molecules that are known to use specific entry pathways. Microscopy can also be used to localise virus in infected animal tissue. The persistence of foot-and-mouth disease virus in animals that have recovered from an infection, is worrying to scientists and livestock owners alike, because of the possibility that the virus could spread to previously unexposed animals within a herd. Confocal microscopy was used recently to localise virus in lymphoid tissue of recovered animals, thereby demonstrating persistence (Juleff et al. 2008 PLoS ONE 3:10).

Instruments are always evolving to give the researcher more information, be that better resolution, 3D info or time lapse data. Through using a modern TEM and imaging samples prepared using a new protocol developed at the Institute, we answered a long standing question about African swine fever virus structure: the virion has only one membrane layer. This is important information because it gives us clues about how the virus forms in host cells (Hawes et al. 2008 J Virol 82:16). The more we know about the assembly process the more possibilities there are of blocking it, thereby producing an effective vaccine treatment. With the advances in molecular biology techniques it is now possible to genetically engineer a virus to fluoresce green under UV light. This allows researchers to see virus in real time in the live cell imaging microscope system. We can watch virus behaviour play out before our eyes. It is not easy to create fluorescent viruses but Banyard et al. (2010 J Gen Virol 91:12) were able to make a green rinderpest virus and follow virus replication in real time.

Through the Head of Bioimaging, Dr Pippa Hawes, the Institute also has strong links with the Royal Microscopical Society and BioimagingUK – the UK arm of a pan-European research infrastructure project on the European Strategy Forum on Research Infrastructure roadmap.

For microscopy to continue to thrive, it is important that existing experts teach and train new users and pass on their knowledge. This will lead to development of new techniques as more people become interested in microscopy and what it can do for them. Dr Hawes is heavily involved in organising some of the courses run by the Royal Microscopical Society and firmly believes that teaching new users is fundamental to keeping microscopy vibrant and relevant. The European Union has recognised the need to increase access to microscopy and has initiated the Eurobioimaging scheme which aims to implement microscopy nodes, each within a specialist area, throughout Europe. Dr Hawes said “Bioimaging at the Institute is intrinsically part of the important research we are doing on livestock and poultry diseases that are of global economic importance. The department is ever-evolving to take into consideration the advent of new technologies.”

According to Dr Hawes, the two most significant advances in recent years have been the development of super-resolution techniques in light microscopy, and, electron tomography (ET). It is in the latter that the Institute really excels.

Image left: Low resolution 3D reconstruction of an intracellular African swine fever virion using electron tomography. This large icosahedral virus has a complex multi-layered structure consisting of membrane, protein and DNA. African swine fever virus is part of the nucleo-cytoplasmic large DNA virus (NCLDV) family that includes poxviruses (which infect a wide range of mammals), and ranaviruses (which infect amphibians). The virion in this reconstruction is approximately 200nm in diameter.

Electron tomography involves the collection of 3D datasets using an electron microscope. It is possible to obtain images by sampling around a given axis and then rebuilding the images in a 3D representation. Crucially, this allows researchers to see interactions between macromolecules in 3D space, including membrane structures within cells, or even individual large proteins.

In an ongoing project at the Institute, African swine fever virus precursor structures are being investigated by electron tomography in host cells. The advantage of ET is that it can show connections between membranes and viruses in a cell that would normally be impossible to see. With this information we can deduce how viruses replicate and potentially develop a strategy to block this process.

Dr Hawes continued “We would like in the future to work with a super-resolution microscope and to build on our experience with confocal microscopy with something called TIRF microscopy, which would enable us to view events at the cell surface. This would obviously be powerful for generating new understanding of how viruses actually enter cells in the first place.”

Much of the work of the Institute is done under the highest levels of biocontainment and, with a significant trend in bioimaging towards live cell imaging and cryo-stabilisation; techniques embraced by the Institute, there are some unique challenges. This means that sample preparation needs particular care and consideration where samples have to be handled according to the best principles of biocontainment.

Dr Hawes said “Often it is the positioning of our microscopes that determines the techniques we are able to use. For example, both live cell imaging and cryo-electron microscopy use samples that include live virus. Because of this, we actually house our microscopes within the highest biocontainment areas of the Institute.”

Colleagues within Bioimaging collaborate on research projects with groups inside the Institute and with external institutions. This means there is a wide range of scientific expertise in virology and cell biology, as well as microscopy. We hope to build on this in the future and increase the number of projects we work on.

The next couple of years will be a time of change for the Institute due to the construction of new, state of the art facilities. Within this new building there is a bespoke area for Bioimaging, especially designed to house confocal and electron microscopes, along with other new equipment. It is an exciting time and there is great potential to expand internal and external collaboration.