A talented early career researcher was awarded the Walter and Dorothy Plowright Young Researchers Prize for veterinary research on Friday (27 April 2012) during the 425th meeting of the Veterinary Research Club in Pirbright at the Institute for Animal Health.

The prize is named after Dr Walter Plowright FRS and his widow, Dorothy. Dr Plowright was Head of Microbiology at the Institute for Animal Health’s Compton Laboratory from 1978 to 1983 and has been widely celebrated for his work to develop a vaccine that contributed to the global eradication of rinderpest. The international Food and Agriculture Organisation awarded a medal to the Institute in 2011 for the contribution of IAH science, including that of Dr Plowright, to stamping out rinderpest across the globe. 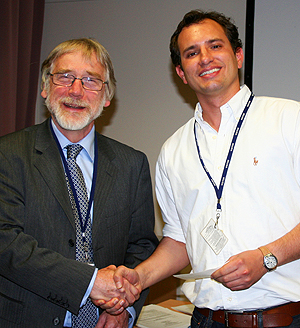 Peter Stevenson and Leonard Both.

Leonard Both was awarded the prize of £150 for his talk entitled “‘Of dogs and men’: Novel post exposure tools for Rabies virus infection”, which impressed a panel of judges selected from the top echelons of the UK’s veterinary research community. Mr Both is studying for a PhD at St George’s University of London, which is jointly funded and coordinated by the Animal Health and Veterinary Laboratories Agency and St George’s.

Mr Both was competing against four other researchers, including two from the Institute, who all gave presentations on Friday afternoon following a tour of new high containment laboratory facilities that are currently being built at the Institute in Pirbright.

The prize was awarded by Dr Peter Stevenson who is President of the Veterinary Research Club and chaired the judging panel on the day.

Dr Stevenson said “The standard of research and the presentation skills of these young researchers have once again been extraordinarily high. I would like to congratulate Leonard on an exceptional talk and wish him all the best for the future. We look forward to hearing more as this research progresses.”