Pirbright scientists have discovered that infection with two strains of avian flu can lead to the emergence of a new virus strain with the potential to jump from birds to humans.

Human cases of avian influenza are extremely rare but can occur if a person comes into very close contact with an infected or dead bird.

The study shows that avian influenza virus strains H9N2 and H7N9 can share genetic information to create an H9N9 strain with the potential to cause more severe disease in poultry and pose a threat to human health.

Avian influenza, also known as ‘bird flu’, is a type of influenza that spreads among birds. The UK faces a seasonal increase in the risk of avian influenza outbreaks which are associated with the migration patterns of wild birds.

Avian influenza is found across the globe, and in countries where multiple strains circulate it is important to monitor the emergence of new strains. Low virulence H9N2 and H7N9 circulate in poultry in Asia but do not cause severe disease. However, they are known to swap genetic information which can result in the emergence of an H9N9 strain, which can cause severe disease.

In collaboration with the Animal and Plant Health Agency (APHA), researchers at Pirbright discovered that the H9N9 strain was able to multiply significantly better in poultry cells, indicating the potential to cause more severe disease. They also discovered that it had a higher replication rate in human cells and could bind to these cells better than H9N2. The H9N9 strain can infect and transmit between ferrets highlighting the potential to cause disease in humans.

The study, published in the Journal of Virology, shows that strains already circulating in poultry populations can exchange genetic material, leading to the creation of new strains. This increases the risk of the virus jumping from avian hosts to humans and other mammals. The study concludes that H7N9 and H9N2 viruses circulating in the same regions pose a pandemic threat, which demonstrates the need for constant monitoring for the emergence of new virus strains. 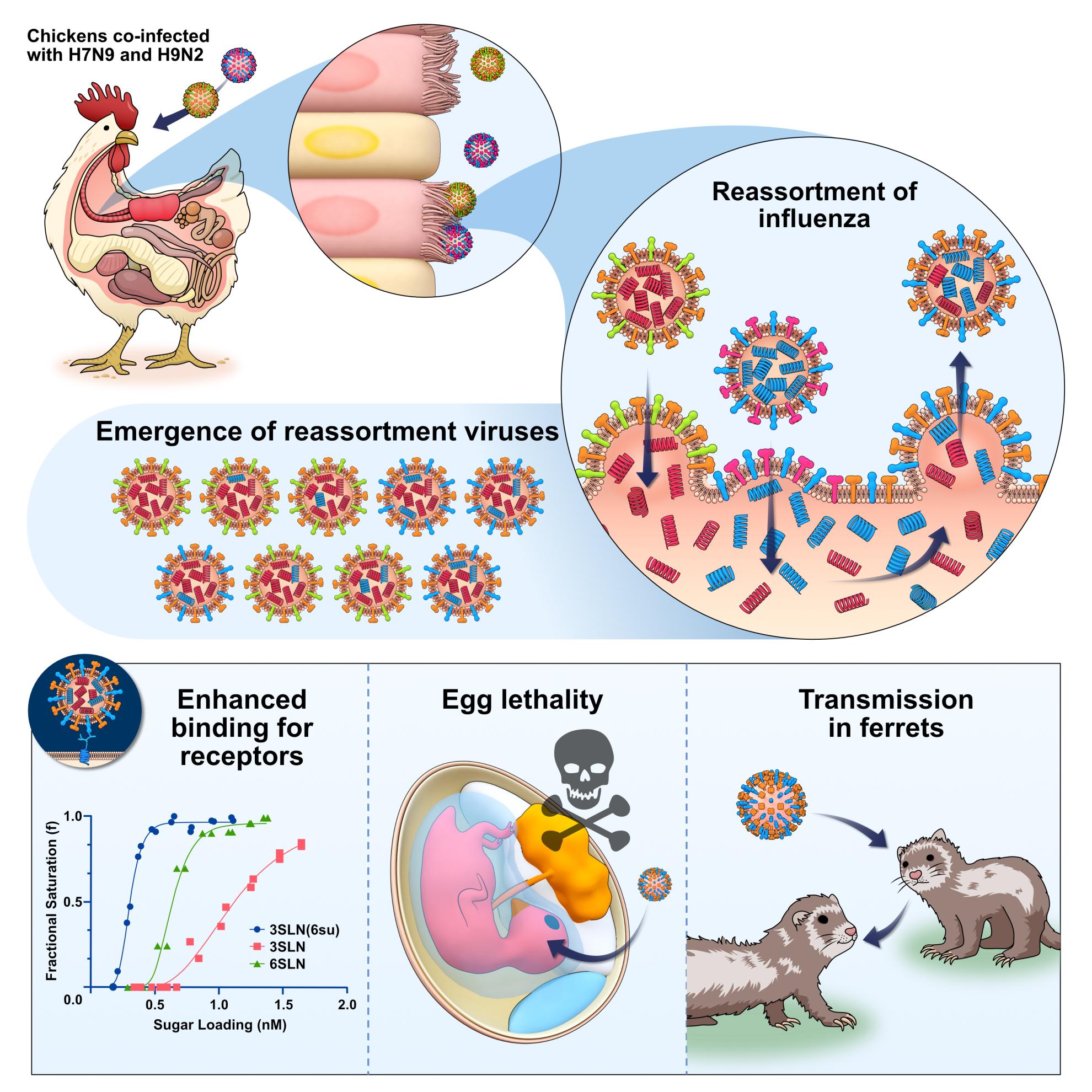 An illustration of the work carried out by Pirbright scientists. The image shows that when a chicken is infected with H7N9 and H9N2 strains of avian influenza, these viruses can reassort (swap genetic information) to create a strain that can bind better to cell, cause death in chicken embryos and spread disease in ferrets

Professor Munir Iqbal, Head of the Avian Influenza Group at Pirbright said: “This is the first study to show that infection with circulating H9N2 and H7N9 influenza viruses could create new virus strains such as H9N9 that cause more disease in poultry and pose a greater risk to human health. If a host is infected with two different strains, there is always a chance that they will swap genetic material to create a new strain. When this happens, it could lead to many outcomes, for example the virus becoming more or less able to cause disease in a host, or a virus acquiring the ability to jump between hosts. This leads to viruses that primarily cause disease in animals having the ability to infect humans, which is what we have observed in this study. More research is needed to determine which avian flu viruses could combine and pose a threat to poultry and human health.”

This study was supported by grants funded by the UK Research and Innovation Biotechnology and Biological Sciences Research Council under Newton Fund UK-China-Philippines-Thailand Swine and Poultry Research Initiative and Zoonoses and Emerging Livestock Systems (ZELS) with grants from FCDO and Dstl. The work was also funded by the GCRF One Health Poultry Hub and Defra (UK, including the Devolved Administrations of Scotland and Wales).