Home » News » Ten years on: Celebrating the eradication of rinderpest

Ten years on: Celebrating the eradication of rinderpest

Today the world celebrates ten years since rinderpest virus was officially declared eradicated on 25 May 2011 by the World Organisation for Animal Health (OIE). This achievement particularly resonates with the goals and history of The Pirbright Institute, whose staff both past and present have played an essential role in fighting this devastating cattle disease. 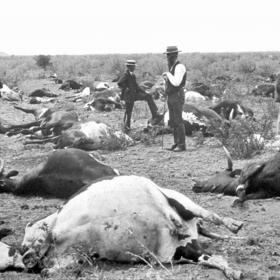 Cows dead from rinderpest in South Africa, 1896
For centuries rinderpest virus caused vast animal welfare problems amongst domestic cattle and buffalo in Europe, Africa and Asia, destroying livelihoods of those that relied on the animals. The virus damaged the respiratory and digestive tracts of infected animals leading to diarrhoea, dehydration, and ultimately death - mortality being 80 to 90 percent.

Pirbright research and surveillance was fundamental in the eradication of rinderpest. Over a number of decades, Institute scientists performed thousands of diagnostic tests to advise and monitor the eradication programme, as well as developing new diagnostic tests and training local people and scientists of Africa and Asia in how to use them. In 1994 Pirbright became the World Reference Laboratory for Rinderpest (WRLR), on behalf of the Food and Agriculture Organization of the United Nations (FAO) and the OIE.

However, even with the most effective diagnostic procedures in place, it is unlikely rinderpest would have been defeated without an effective vaccine. A highly successful rinderpest vaccine was developed by the late Walter Plowright, who previously served as Head of the Department of Microbiology at Pirbright. His achievement played a major role in the global eradication of this disease, for which he was awarded the World Food Prize in 1999.

In recognition of his contributions, The Pirbright Institute named its state-of-the-art high containment laboratory after Walter Plowright. The BBSRC National Virology Centre: The Plowright Building houses research dedicated to preventing and controlling exotic viral diseases of animals, such as African swine fever and foot-and-mouth disease. The Plowright Building is also home to the WRLR and several other reference laboratories that help to diagnose and track disease outbreaks across the globe.

The eradication of rinderpest was a colossal achievement, one which has only ever been accomplished with one other viral disease: smallpox.

Professor John Anderson, MBE, former Head of the World Reference Laboratory for Rinderpest, said: "For too long we thought only of controlling rinderpest, never dreaming of eradicating it. But eventually that is what we all accomplished!"

Once the eradication was official, Pirbright received a medal and certificate with special thanks from the FAO acknowledging the 'outstanding contribution' the Institute had made to the fight against the deadly disease.

The medal presented to Pirbright for the 'outstanding contribution' made to the eradication of rinderpest.

With rinderpest no longer circulating in the wild, the next challenge is to consolidate and reduce the remaining virus samples from laboratories, which potentially pose a risk of reintroduction. A number of laboratories across the world still hold stocks of rinderpest virus containing materials, and they are now being encouraged to send their remaining stocks to FAO and OIE Rinderpest Holding Facilities (RHF). Pirbright is among the seven RHF laboratories that have been inspected and approved as secure enough to hold the virus.

Pirbright scientists completed a major milestone in the OIE and FAO programme to ensure the world remains free from the eradicated disease by destroying the final archive stocks of rinderpest virus held at the WRLR in June 2019 – over 3000 samples. Before their destruction, the full genomes of rinderpest isolates were sequenced and recorded to retain their biological information whilst removing the risk posed by holding the live virus.

The triumph of rinderpest's eradication paves the way for other livestock viruses to follow. Plans are now underway to eradicate peste des petits ruminants (PPR), a related disease which affects sheep and goats, causing up to $2.1 billion a year in global losses. Pirbright scientists are joining the eradication effort through developing PPR vaccines and providing diagnostic capabilities as an OIE Reference Laboratory for PPRV. Lessons learnt from the successful eradication of rinderpest could help eliminate PPR from natural circulation by 2030.