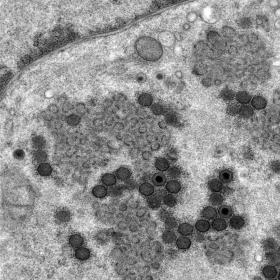 Transmission electron microscope image of a viral factory showing new virions amongst dense protein/membrane accumulations
Developing effective vaccines and treatments against African swine fever virus (ASFV), which kills up to 100 percent of the pigs it infects, has been difficult owing to the virus’s large genome and lack of understanding about how it replicates within cells. Recent bioimaging studies from The Pirbright Institute have uncovered how ASFV forms new copies of itself in areas called viral factories, information which could inform future antiviral treatment development.

Viral factories are complex structures that form within infected cells, which contain a mixture of viral DNA, viral proteins and sections of the virus membrane. These elements are packaged together to make new ASFV particles, which consist of three protective protein and membrane layers that encase its DNA genome.

Until now, the mechanisms by which the virus particles are assembled have remained unclear, but research published in Viruses has provided new super-resolution images of the early virus assembly stages that occur within viral factories.

Scientists found that small, individual sections of virus membrane appear to grow and link together and can form ‘skeletons’ of virus particles. How these membrane fragments form and how they are moved to the factories are questions that future work will need to answer. 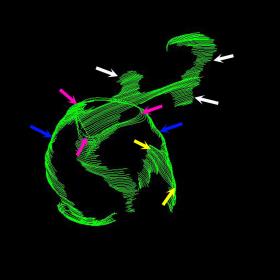 Professor Pippa Hawes, Bioimaging Group Leader at Pirbright said: “Powerful imaging techniques such as electron microscopy and tomography have allowed us to investigate the 3D structure and location of ASFV early membrane assembly. Previously these structural proteins have only been visible as a ‘cloud’ of protein, but our recent work has revealed their netlike structure.”

African Swine Fever Vaccinology Group Leader, Dr Chris Netherton, added: “One of the questions we are working towards answering is where the ASFV building blocks come from. Our recent work is a big step forward in understanding how this virus assembles in cells, but there is still a lot of work to do to understand the process completely. If we can map the assembly process in detail then it may be possible to block one or more of these steps to create future antiviral treatments.”

This study was funded by the Biotechnology and Biological Sciences Research Council (BBSRC), part of UK Research and Innovation (UKRI).