A new gene that determines the sex of malaria mosquitoes has been discovered by scientists at The Pirbright Institute. The gene, named femaleless by the researchers, can be manipulated to prevent female mosquitoes from developing (only females bite to feed on blood and spread disease), which could provide a new means for genetic control of mosquito populations that could be used to break malaria transmission.

In a study published in Current Biology, scientists from the Vector Molecular Biology Group initially identified femaleless in the mosquito Anopheles gambiae, a primary carrier of malaria in Africa. They demonstrated that if the expression of the gene in mosquito eggs is experimentally decreased, females develop into individuals that look more like males in appearance and are unable to mate or feed on blood, or their development is arrested altogether. 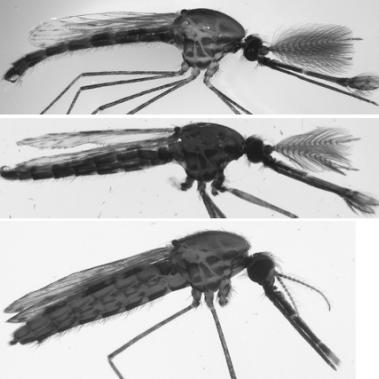 Image shows the effect of disabling femaleless on the physical appearance of mosquitoes. From top: wild-type male, female with disabled femaleless gene, wild-type female.
Further investigation established that femaleless is exclusive to mosquito species belonging to the genus Anopheles, which is solely responsible for transmitting human malaria. In 2019 alone, malaria caused over 200 million clinical cases and more than 400,000 deaths globally. The gene was detected in all Anopheles species studied, and its genetic sequence proved to be highly conserved (similar in different species). The study also demonstrated that disabling femaleless in distantly related Anopheles species has the same effect as seen in Anopheles gambiae.


The researchers also found that femaleless, in addition to the sex determining role in developing females, is involved in controlling a phenomenon called dosage compensation. Like in humans, females of the Anopheles mosquitoes have a pair of identical sex chromosomes, called XX, whilst males have XY. Dosage compensation is a process in which expression levels of genes from a single X chromosome in males are two-fold increased, to equal the levels of expression from the two X chromosomes in females.

Inactivating femaleless causes the genes from both X chromosomes in females to express at twice the normal rate, which is toxic to female mosquitoes. This is only the second time the identity of the molecular link between sex determination and dosage compensation in insects has been discovered, the first being found in the common fruit fly, Drosophila melanogaster.

Dr Jaroslaw Krzywinski, head of the Vector Molecular Biology Group at Pirbright said: “We first investigated femaleless because we suspected it would have a role in sex determination, but it was unexpected that knockdown of the gene’s expression would lead to female lethality. This gene is highly conserved in sequence and function in various Anopheles species and, as such, provides an excellent universal target to eliminate females of major malaria vector species, enabling the control of their populations. We hope that this discovery could help us to tackle one of the most devastating insect-borne diseases in the world.”

This study was funded by the Biotechnology and Biological Sciences Research Council (BBSRC), part of UK Research and Innovation (UKRI).