A case study undertaken by scientists at The Pirbright Institute is the first to confirm that milk obtained from in-line milk samplers on a large-scale dairy farm can be used to detect circulating foot-and-mouth disease virus (FMDV) in cattle.

Previous work carried out by the team had shown that it was possible to detect FMDV from the milk of infected cattle, opening up the potential for this sampling method to supplement existing techniques for FMD surveillance.

The new study, published in Frontiers in Veterinary Science, set out to assess the practicalities of using such a sampling method in the field. By testing 732 pooled milk samples from a large dairy farm in Saudi Arabia, scientists were able to demonstrate that specific strains of FMDV could be detected in milk during an outbreak.

The farm experienced outbreaks caused by two distinct FMDV strains, which milk sample tests were able to correctly distinguish. Interestingly the farm was using a high-potency FMD vaccine and the disease incidence was relatively low, suggesting that animals on this farm were becoming infected without showing clinical signs. The significance of this for FMD outbreaks is yet to be determined.

Combined with data from previous studies, these results confirm that pooled milk samples could be used to detect FMD outbreaks in field settings and even reveal FMD infection in a herd where animals are not displaying clinical signs of disease, making it useful for FMD surveillance.

Dr Donald King, Head of the Food and Agriculture Organization of the United Nations (FAO) World Reference Laboratory for FMD at Pirbright, said: “Although individual infected animals cannot be identified when the milk is pooled, our study shows that this method provides a convenient and low-cost way of detecting the presence of FMD virus at the farm level. 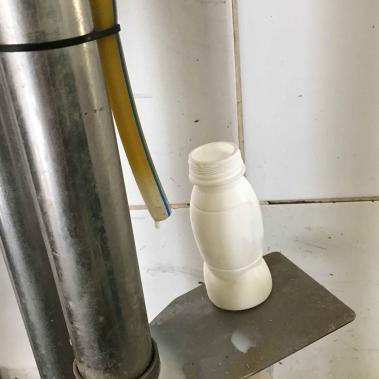 Milk taken from in-line samplers at the farm to test for the presence of FMD taken by Dr Nick Lyons
“This methodology could be integrated into FMD surveillance programmes and provide complementary benefits to conventional surveillance strategies, such as sampling large numbers of animals at once and obtaining samples in a way that is less invasive for the animals.”


Around 4000 cattle were housed at the farm in the study, which used systems comparable to those in many countries that are FMD-free, highlighting the potential for this approach to be utilised in disease-free regions in the event of an outbreak. This would allow the rapid identification of infected herds to help trace the source and spread of infection, as well as providing a way of screening infected premises to ensure disease freedom.

The study was funded by the Biotechnology and Biological Sciences Research Council, part of UK Research and Innovation (BBSRC UKRI), the US Department of Homeland Security through Lawrence Livermore National Laboratory, supplemented by a fund for applied research from the European Commission for the Control of Foot-and-Mouth Disease (EuFMD).