Researchers from The Pirbright Institute and several Chinese institutes gathered in Zhengzhou, China between 23 and 25 September 2019 to attend the annual UK-China Centre of Excellence for Research on Avian Diseases (CERAD) conference. The event also included an opening ceremony that welcomed the Henan Academy of Agricultural Sciences and Henan Agricultural University as the newest members of the CERAD network.

The conference, titled “New Strategies and Technology for Avian Disease Prevention and Control”, addressed the current problems in controlling diseases that have a huge economic impact on the poultry industry. Pirbright’s Professor Venu Nair and Dr Yongxiu Yao were among the keynote speakers who discussed recent research tackling issues such as the ways in which viruses become more damaging to hosts, cross-species transmission and changes in clinical signs.

The poultry breeding industry has developed vigorously in China, which has been amplified by the decimation of the nation’s pig population due to ongoing outbreaks of African swine fever. Reduced access to pork products has placed a higher demand on the poultry industry, making poultry stock sustainability even more vital. However, the constant threat of both known and emerging avian diseases creates significant barriers to meeting the increased demand and highlights the urgent need to strengthen research that will reduce disease burden.

Professor Venu Nair, leader of the network at Pirbright, said: “The conference created the perfect environment for fostering new collaborations and knowledge exchange, which will lead to our increased understanding of avian diseases and the development of new technologies. We hope that this will result in improved strategies for prevention and control of many poultry diseases, thereby enhancing food security in China and the UK.”

Professor Nair and Dr Zhiqiang Shen of the Shandong-Binzhou Animal Science and Veterinary Medicine Academy have recently been shortlisted for the Newton Prize in recognition of their work establishing CERAD through funding from the Biotechnology and Biological Sciences Research Council (BBSRC UKRI) Newton Fund. 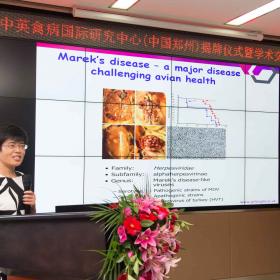