What is avian influenza? 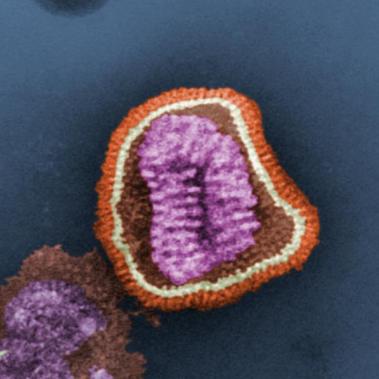 False coloured electron micrograph of an avian influenza virus. Credit: Frederick Murphy
Avian influenza, commonly known as ‘bird flu’, is a disease caused by multiple strains of influenza virus. The viruses can infect a wide range of animals, including humans and pigs, but the natural reservoir lies in populations of wild aquatic birds such as ducks and gulls.

Flu virus strains are categorised by the combination of the two proteins found on the outside of the virus, haemagglutinin (H) and neuraminidase (N), for example, H5N6 or H9N2. The H protein binds to cell receptors in order to initiate infection whilst the N protein helps release new viruses from an infected cell.

Strains are also classified by severity – low pathogenic avian influenza (LPAI) viruses cause clinical signs such as mild breathing problems, decreased egg production and growth. Some birds, particularly ducks and geese, don’t display any signs of LPAI infection and are still able to spread the disease. When LPAI viruses circulate in high density poultry areas, the viruses can mutate into highly pathogenic strains. Highly pathogenic avian influenza (HPAI) viruses have severe and often fatal effects on some species of birds such as chickens but some HPAI strains cause mild or no clinical signs of disease in wild birds and domestic waterfowl. These strains are notifiable, meaning government control measures must be put in place.

Avian influenza can be carried vast distances by wild migratory birds, and can infect domestic poultry through direct contact or through contaminated droppings and bodily fluids. Because of this, there is a year round risk of avian influenza, which can increase depending on the disease status in Europe and the migration season of wild aquatic birds. You can check the UK risk status on the Government website.

All avian influenza cases should be reported. You can find out how to spot signs and report the disease on the Government website, or the Department of Agriculture, Environment and Rural Affairs (DAERA) website if you are in Northern Ireland.

How can I protect my poultry?

Good biosecurity is essential in preventing poultry from being exposed to the disease. There are some simple steps you can take to stop your birds from contracting avian influenza, whether you own a commercial farm, are rearing game birds or just have a couple of hens in the garden. You should also register your birds on the Great Britain Poultry Register so that you can receive alerts to outbreaks in your area. If you own poultry in Northern Ireland you must register them with DAERA.

Why is influenza so difficult to prevent?

Influenza viruses are constantly changing. When they replicate, small errors called mutations are copied into their genome – some of these will alter the virus’s proteins, allowing the virus to escape detection by the immune system. Birds are not vaccinated against flu in the UK and the available vaccines used in other countries are unable to protect against all strains of flu, so each strain requires a different vaccine. However, even if a bird has been vaccinated against the correct strain, mutations could prevent the immune system from recognising the same field strain.

All flu viruses also have the potential to undergo a process called reassortment. This is where two or more strains of influenza infect the same animal, which enables them to swap parts of their genome. The resulting viruses can potentially have different characteristics to the original strains, such as the ability to replicate in different species, including humans. 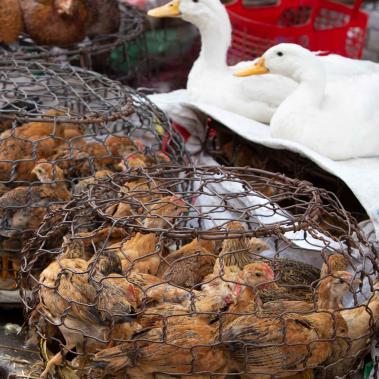 Poultry at a Vietnamese market. Certain trading practices can increase spread between birds, and can increase the risk to people.
Avian influenza viruses such as H5N1 or H7N9 have infected people, predominantly in South-East Asia, but in these cases the virus has been transmitted directly from infected birds to people with no onward spread. There is some evidence that avian influenza can be passed from person-to-person, and though there are no records of efficient or sustained human transmission, there is a constant risk that one of the new strains may spread easily among people, which could result in a new influenza virus pandemic.

Changes in the virus genetics from mutation or reassortment make it very difficult to anticipate how influenza viruses will spread through a population and whether current vaccines will be suitable for the strains that are circulating. The influenza research programmes at Pirbright are therefore progressing understanding of the virus and finding better ways to prevent its spread.

How can research help?

Dr Holly Shelton and Professor Munir Iqbal, Group Leaders at the Institute, are researching how the characteristics of influenza viruses can change the outcomes of disease. Studying flu at the molecular level allows them to find out how the virus evolves to overcome avian immunity, and how changes in their genome can alter disease severity and ability to affect different species.

Their teams are working on identifying genetic markers for specific disease traits that can be used in surveillance systems to provide forewarning of strains that could cause pandemics. For example, Dr Shelton’s Influenza Viruses group are looking at which characteristics allow the viruses to become resistant to antiviral drugs that are currently used to treat human infections of influenza, allowing surveillance to provide an early warning of viruses that could cross into humans and be difficult to control.

The team is also investigating how long it takes for avian influenza viruses to adapt to new mammalian species. Establishing which strains can rapidly adapt and identifying the genetic changes made to enable infection of mammalian cells will help with surveillance efforts and potentially lead to the development of techniques that will help prevent these mutations occurring.

Vaccination and rapid diagnosis are very important for prevention and control but it is still not currently possible to protect against all influenza strains. Professor Iqbal’s Avian Influenza group is exploring which sites on the virus trigger the chicken immune system to respond quickly and fight off infection. This will better inform scientists’ ability to match vaccines to strains in the field and could help to develop vaccines that are more effective.

Professor Iqbal’s group is also developing multivalent vaccines that protect chickens and ducks from several avian influenza subtypes at once, as well as test kits for rapid diagnosis of different subtypes at the flock-side. However, these are not currently promoted for use in the UK as all testing for avian influenza must be carried out by the Animal and Plant Health Agency (APHA) in order to rule out suspected cases of notifiable disease.

Visit Pirbright’s Influenza Viruses and the Avian Influenza group pages to find out more about their research.