The Pirbright Institute has become a member of the Outreach Network for Gene Drive Research, whose mission is to raise awareness with the public about the potential value of this technology. By joining the network, Pirbright scientists will help the public to understand what gene drive research involves and how it might provide alternative solutions to prevent mosquito-borne diseases.

What is a gene drive? 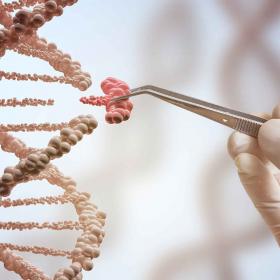 Genes are sections of DNA that provide instructions for a particular trait in an organism, such as eye colour, and offspring usually have a 50/50 chance of receiving a particular gene from its parents. Gene drives increase the likelihood that a gene may be inherited, potentially allowing it to spread rapidly through a population over several generations. Gene drives occur naturally in mosquitoes, humans and many other organisms. Scientists are now applying this concept to genome editing research to increase the likelihood of inheritance of modified genes; in some prototypes to more than 99% rather than 50/50.

How can gene drives be used?

Increasing the likelihood of a trait being inherited in a population could provide solutions to complex problems in public health and conservation. Gene drives are being investigated for their use in the prevention of diseases that are spread by insect populations, such as mosquitoes. Gene drives could also be used to suppress or eliminate pest populations, for example agricultural pests, or invasive species that threaten native ecosystems by introducing disease or out competing local species for resources.

How are Pirbright using gene drives?

Pirbright’s Arthropod Genetics group, led by Professor Luke Alphey, is using this technology to create proof-of-concept tools with the ultimate goal of reducing or eliminating mosquito-borne diseases. The aim of using gene drives in mosquitoes is to genetically modify them in the laboratory, and then - after a great deal of testing, regulatory oversight and community approval - release them in areas where mosquito-borne diseases are prevalent. Typically males would be released, as only female mosquitoes bite; upon mating with the wild females, the gene drives in the modified mosquitoes will be inherited by the offspring, spreading the desired genes down through subsequent generations.

The group are primarily working with Aedes aegypti and Culex quinquefasciatus mosquitoes, which spread diseases of the flavivirus family, such as Zika and dengue. By using a gene editing technology called CRISPR/Cas9, scientists are able to precisely insert DNA sequences into the mosquito genome, allowing them to test prototype components of synthetic gene drives that aim to control mosquito-borne diseases in two ways.

The first is to modify mosquitoes to pass on genetic traits that result in infertile offspring, which causes a crash in the mosquito population, reducing the number of mosquitoes below the critical level needed to sustain disease transmission cycles.

The second is to prevent mosquitoes from contracting diseases caused by flaviviruses through inserting gene drives that promote the expression of antiviral genes. These modifications would be inherited at an increased rate, resulting in a mosquito population that is no longer able to transmit the disease.

This provides an alternative to the current solutions for reducing mosquito-borne diseases, which often involve the use of pesticides that can have widespread negative effects on the ecosystem. Gene drives on the other hand are targeted to a specific species, meaning only the pest population will be affected.

“Another important feature of the gene drives we are creating (called daisy drives or, for a different design, underdominance-based drives) is that they allow us to limit how far the genes can spread through the target populations”, said Professor Alphey. “This is heavily reliant on sophisticated modelling that we use throughout the entire gene drive design process. From the very beginning, models are used to assess the parameters of the gene drive, including how long we want the gene drive to prevail in a population and how far geographically we want it to spread.”

How is the risk and benefit of gene drive applications assessed?

There are many potential benefits to using gene drives as smarter alternatives to current population and disease control methods, but as with all new technologies, it is important to evaluate the possible risks. Concerns that gene drives could unbalance the wider ecosystem are valid and must be addressed carefully in the regulation of the technology and its use.

“Each potential application of a gene drive should be taken on a case by case basis”, said Professor Alphey. “For example, when tackling a disease that is transmitted by an invasive mosquito species, it may be desirable to remove the species completely to prevent disease transmission and return the ecosystem to its natural state. But in circumstances where native mosquitoes are spreading disease, policy-makers might prefer to use gene drives to either modify the existing population with antiviral genes or to reduce their population enough in a specific area to prevent disease transmission, before allowing their numbers to recover.”

“Our goal at Pirbright is to provide tools for these options so the best solution can be applied to each situation. Although the research is still at an early stage of development, with careful consideration, gene drives could provide far more refined and regulated ways of preventing mosquito-borne diseases.”