Scientists at The Pirbright Institute have found that the transmission of avian influenza viruses in Vietnam is influenced by the structure of live poultry trading networks. Their work has identified the groups that are most likely to employ trade practices that impact the risk of infection in chickens, which could better inform vaccination strategies in poultry populations.

Published in Transboundary and Emerging Diseases, Pirbright researchers worked with partners in Vietnam at the National Centre for Veterinary Diagnostics and Oxford University Clinical Research Unit to demonstrate that the vendor position in the trading network impacted their odds of having avian influenza infected birds. Chickens that retailers bought from middlemen had an increased chance of being infected compared to those that were bought directly from large farms. Odds of infection were also higher for retailers that had a greater number of ducks unsold per day.

Middlemen suppliers could provide a risk factor for influenza virus infection due to their tendency to travel between live bird markets and mix poultry stocks. Likewise, retailers could be associated with higher odds of infection because they may purchase birds that have ‘changed hands’ multiple times, increasing the time birds spent within the trade network and facilitating the mixing of birds from different sources.

The study also established that viruses from the same market were genetically more similar than those from other markets or provinces, and identified two strains of influenza (H5N6 and H9N2) circulating in the markets that were sampled. The co-circulation of influenza strains at live bird markets presents more opportunities for strains to infect the same bird simultaneously and swap genetic material, which could result in an influenza strain that is capable of infecting humans.

“Live bird markets could allow highly pathogenic avian influenza H5 strains, which cause severe disease in poultry, to mix with strains that we have shown to have the genetic potential to infect humans, such as H9N2.” said Professor Munir Iqbal, leader of the Avian Influenza Group at Pirbright. “Given this, it is important for us to establish factors in these markets that increase the likelihood of strains mixing, and our study has allowed us to identify high risk groups that are more likely to perpetuate the spread of avian influenza.”

This understanding of the dynamics and practices of live bird markets in Vietnam could aid vaccination strategies during outbreaks. H5 strains are already vaccinated against as part of outbreak response measures and discretionary use of routine H5 vaccines is used in some commercial farms. However, high risk groups identified in this study could also be targeted, particularly farms that are highly connected to trade networks where high‐risk traders operate. This could help in preventing the co-circulation of influenza strains and lower the risk of mutations occurring that could enhance virulence and transmission of viruses to humans. 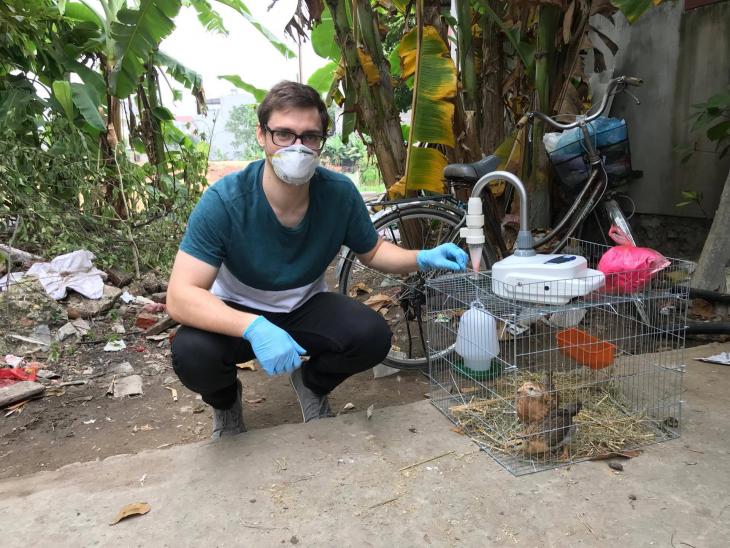 The feature image shows a typical poultry cage found within the live poultry markets and the image above shows Dr Joshua Sealy air sampling chickens for influenza from one of the markets. This study proposal was looked at in detail by The Pirbright Institute's Animal Welfare and Ethical Review Board and through discussion with the researchers, suitable housing that ensured provision of adequate space, food, water and bedding was provided for the chickens. The study was by funded by Biotechnology and Biological Sciences Research Council (BBSRC UKRI) Zoonoses and Emerging Livestock Systems (ZELS).