The Pirbright Institute is one of 13 organisations who have been announced as recipients of the first Leader in Openness awards from Understanding Animal Research (UAR). 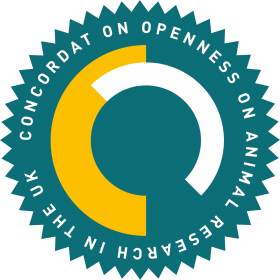 Held for three years, 2019-22, the award recognises Pirbright’s commitment to the UAR Concordat on Openness on Animal Research in the UK as one of 121 UK life science organisations that have signed the Concordat.

Signed by universities, charities, commercial companies, research councils, umbrella bodies and learned societies, the Concordat has a set of commitments requiring organisations to enhance their communication about their use of animals in research.

Concordat signatories must meet strict criteria before their applications for the Leader in Openness award are assessed by a public panel and two peers. This requires applicants to show evidence of the innovation and work needed to change attitudes and practices towards transparency regarding the use of animals in research.

At Pirbright this process resulted in extensive reworking of the Institute’s Animals in Research webpages, including easier navigation and the addition of new information and resources made available for download. Pirbright also contributes annually to the #AnimalStats campaign when the Home Office releases the animal research statistics in July.

Dr Michael Johnson, Pirbright’s Home Office Licence Holder, said: This Leadership in Openness award is a reward for the great effort that many different teams across the Institute have put into promoting openness and awareness of how and why we do animal research. The award also gives Pirbright more opportunities and impetus to advance openness to the public through direct engagement, media and promotion of our advances in enrichment and animal care”.