Peste des petits ruminants (PPR), also known as goat plague, is highly contagious and infects small ruminants such as sheep and goats, causing up to 90% mortality. The disease is prevalent across large parts of Africa, the Middle East, India and China and is estimated to cost between US$1.4 billion and US$2.1 billion globally each year. In 2017, the Food and Agricultural Organization (FAO) and the World Organisation for Animal Health (OIE) introduced a global eradication programme to reduce the devastating impact PPR has on the economy and food security of affected countries. 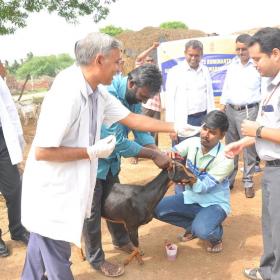 “Over 40 vets joined our vaccination campaign in the Tanir Kulum village of Tiruvallur District, TaminNadu (close to Chennai), where we administered vaccines to over 400 sheep and goats in a single day. We also ran an awareness camp where we provided farmers and vets alike with expert guidance on diagnosing clinical signs of PPR and what measures they could take to reduce its spread”, said Professor Satya Parida from Pirbright, who led the collaborative effort with Dr Dhinakar Raj from TANUVAS.

Alongside the campaign, the team held their final workshop at TANUVAS, which concluded a four year Farmed Animal Disease and Health (FADH) grant joint funded by the Biotechnology and Biological Sciences Research Council (BBSRC) and the Indian Government’s Department of Biotechnology (DBT). “This grant has enabled us to collaborate with four organisations across India, and ensured that our research can be applied in the field to aid the campaign for PPR global eradication”, said Professor Parida.

The project covered many areas of research which are essential for understanding PPR and creating tools to help control and prevent the disease. The team are filing a patent application for their newly developed PPR vaccine, which is the first to differentiate between vaccinated and infected animals (DIVA) – a quality that enables livestock owners to protect their animals whilst continuing to trade. 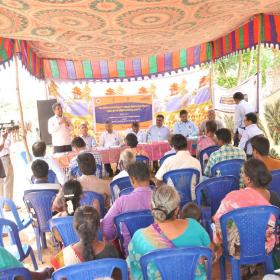 The team have also investigated how the PPR virus (PPRV) infects sheep and goats and how their immune systems respond. By inserting green fluorescent protein into virulent PPRV and administering the modified virus to goats, they demonstrated that PPRV primarily infects the tonsils, challenging the earlier belief that the virus first replicates in the respiratory tract epithelial cells. The collaborative project has also generated better diagnostic tests for use in the field and laboratory, and preliminary research has identified why some Indian breeds of goats and sheep are resistant to the disease, which could help scientists to create PPRV resistant breeds in the future.

The Vaccine Differentiation group at Pirbright has been working towards PPR eradication since 2007. Although this grant has now concluded, the group will continue to collaborate with partners around the world to generate research which could one day lead to the eradication of PPR.