The continued advance of African swine fever (ASF) through Eastern European countries has triggered concern amongst pig farmers and governing bodies. Defra has upgraded the threat to the UK from ‘very low’ to ‘low’ – meaning the risk is “rare but could occur” (EFSA terminology).  This severe disease of pigs entered Europe through Georgia in 2007, and has since continued to the Russian Federation and Eastern Europe, including EU countries in the Baltic States, Poland and very recently the Czech Republic, in wild boar. In early August 2017, an outbreak was confirmed for the first time in Romania among backyard pigs, and in April 2018 Hungary confirm ASF in wild boar.

African swine fever is caused by infection with ASF virus (ASFV), which can have fatality rates of up to 100%. The virus causes acute disease in domestic pigs and wild boar, and may cause varying clinical signs that are similar to other pig diseases such as high fever, lethargy and loss of appetite. Pigs may also die suddenly without clinical signs.

Although the virus does not cause disease in humans, the impact it has on the economy, especially through trade and farming, is substantial. As a consequence of ASF in Poland and the Baltic States the value of pork and pig exports was reduced by $960 million (2014-2015). In Denmark, the predicted impact of an ASF outbreak is estimated at $12 million in direct losses and $349 million in exports.

Unless the appropriate control measures are put in place, additional outbreaks could occur across Europe, further into Russia and beyond to Asia. An outbreak in the UK is unlikely as imports of meat and pigs are extremely well regulated and the UK does not have a wild boar population substantial enough or widespread enough to maintain an outbreak. However, personal imports of pork products from affected areas could result in disease incursion if deliberately or accidently fed to pigs or wild boar, actions which are illegal.

The seriousness of an outbreak for some countries could be far worse than others; China is home to over half the world’s pig population and an outbreak of ASF could result in devastating consequences. In a Veterinary Record article world-expert on ASF Dr Linda Dixon leader of the ASF group at The Pirbright Institute, outlines the factors that increase the likelihood of ASF spreading to China and highlights areas that could be improved to reduce the risk of an outbreak including biosecurity.

More information on the disease and the role The Pirbright Institute is playing to help combat its spread can be found below: 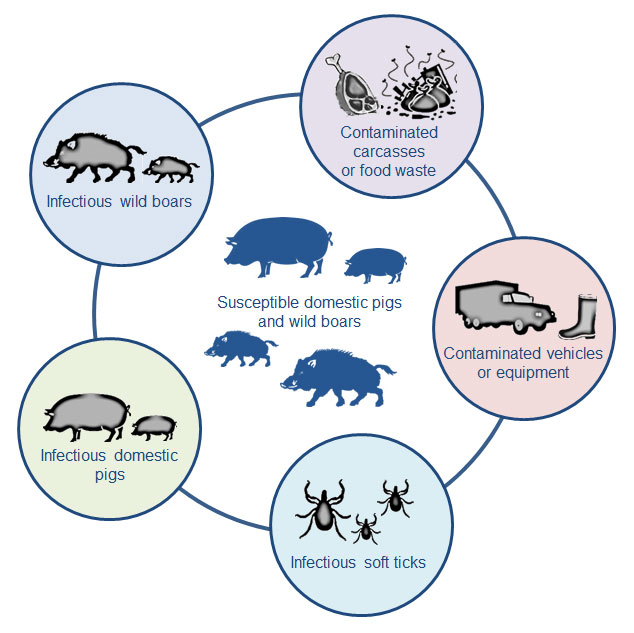 How does ASF spread?

ASF can be spread through direct contact with infected animals. It can also be transmitted to pigs indirectly through the consumption of infected pork products, and through contaminated objects (fomites) such as animal bedding or feed, vehicles, clothes, footwear and equipment.

Infected carcasses, particularly of wild boar, are thought to be important in transmission, and other mechanisms including insects and environmental contamination have been proposed to play a role. In some areas in Africa, soft ticks can transmit ASFV and act as reservoirs for the virus, contributing to spread.

How quickly does it spread?

Although ASF spreads relatively slowly within infected wild boar populations or an infected farm, human intervention, such as the transport of infected meat, can result in alarming large-scale jumps of disease. Recent outbreaks have jumped huge distances, such as the March 2017 jump of more than 3,000km in Russia and the 400km jump to the Czech Republic wild boar in June 2017. The type of pig farming, levels of biosecurity at farms and presence of wild boar populations can all affect how fast the disease spreads.

How can the spread of ASFV be prevented?

Unfortunately, there is no treatment or vaccine available for ASFV, so the following strategies are relied upon to prevent an outbreak:

The study of ASF outbreaks has revealed that control methods need to be adapted to each country’s unique situation. For example, Poland and the Baltic states have previously relied upon the regulation of wild boar populations to control the disease, whereas awareness of farmers and veterinarians is critical for detection in countries such as Ukraine and Russia, where spread in backyard farms is more common.

What is The Pirbright Institute doing to help?

Pirbright, with the help of funding from the Biotechnology and Biological Sciences Research Council (BBSRC) and Defra, is researching crucial areas, such as:

The vaccine research is crucial for the prevention and control of ASF, and good progress has so far been made. An effective vaccine will enable better control and prevention measures to be put in place in the future, helping stem the losses currently being suffered by farmers around the world.

The OIE Reference Laboratory for ASF is based in the BBSRC National Virology Centre at Pirbright which supports the diagnosis and surveillance of ASF worldwide. Pirbright diagnosed the initial outbreak in Georgia and continues to provide expertise and advice to various bodies about the disease.