Scientists from The Pirbright Institute are paving the way for a regional OIE (World Organisation for Animal Health) reference laboratory in Tanzania by training local scientists to further advance their diagnostic capability of Peste des petit ruminants virus (PPRV) in the field and laboratory.

Dr John Flannery and Dr Paulina Rajko-Nenow, from Pirbright’s Non-Vesicular Disease Reference laboratory (NVDRL) went to Tanzania to deliver the training course, which was part of an OIE-funded twinning project between the Institute and the Tanzania Veterinary Laboratory Agency’s Centre for Infectious Disease and Biotechnology (CIDB). It is hoped the training will enable the centre to achieve its goal of securing OIE reference laboratory status, for the Eastern and Southern Africa Region.

Peste des petits ruminants (PPR); also known as goat plague, is highly contagious and has a mortality rate as high as 90%. It infects small ruminants such as sheep and goats and is widespread in many parts of the world, including large parts of Africa, the Middle East and India, and is spreading into other countries. The circulation of the virus in Tanzania was confirmed by the OIE in 2008 and the disease has continued to spread throughout the country.

Dr Rajko-Nenow said: “In recognising the threat of PPR, the OIE funded the twinning project to enhance local knowledge and expertise. The enhancement of diagnostic capabilities, to ensure more rapid detection of the virus in countries around the world, is very much supported by the FAO (Food and Agriculture Organization of the United Nations) & OIE - which aims to eradicate PPR disease by 2030.

“Delays in confirming the disease can lead to misdiagnosis and means vital control measures are not put in place quickly enough. This fosters the spread of the disease and costs many animal lives; with potentially devastating economic and social consequences for farmers and other livestock keepers”.

The Pirbright Institute has a proud history of international collaboration and our scientists regularly visit developing countries where the diseases we study are endemic; to support various projects and initiatives. This enables researchers to share their knowledge and expertise in diagnostics, vaccines and surveillance and provides them with the opportunity of further developing their own understanding, by learning from local scientists and farmers who have first-hand experience in dealing with these diseases.

Dr Rajko-Nenow said: “A large component of the training focussed on the appropriate biosafety measures for dealing with high-consequence viruses such as PPRV, but also for zoonotic viruses. The cells (Vero-dog SLAM) required for the training were brought over from the UK and were successfully split and repassaged in the laboratory. We trained CIDB staff on aseptic techniques, media preparation, subculturing of cells and virus isolation. 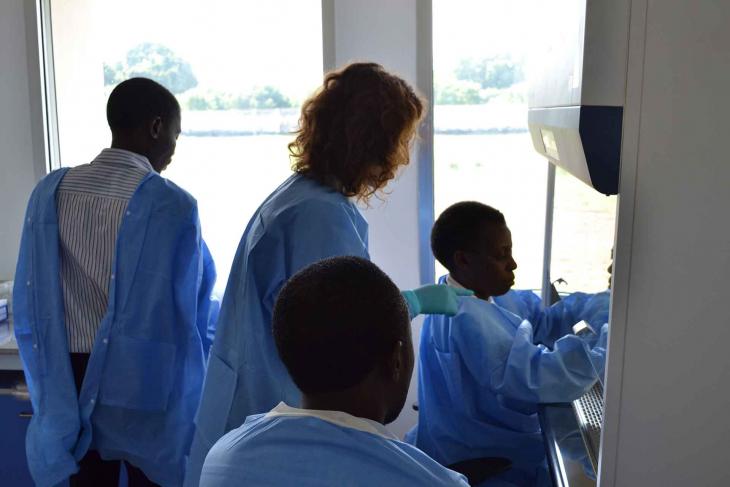 “A stock of cells was also prepared for cryopreservation in liquid nitrogen. Dr Chanasa Ngeleja, Director of CIDB and the Tanzanian project lead, told us it had been over ten years since cell culture work was performed at the centre, and was delighted that the Institute had re-established this important work”.

Dr Flannery said: “It was very encouraging to see the technical capability and interest of the CIDB staff, during the training. We were very pleased that all the staff passed the assessments that we prepared for them and we were especially pleased to identify two potential candidates who we hope will be able to come to the UK and undertake further training at Pirbright later this year”.