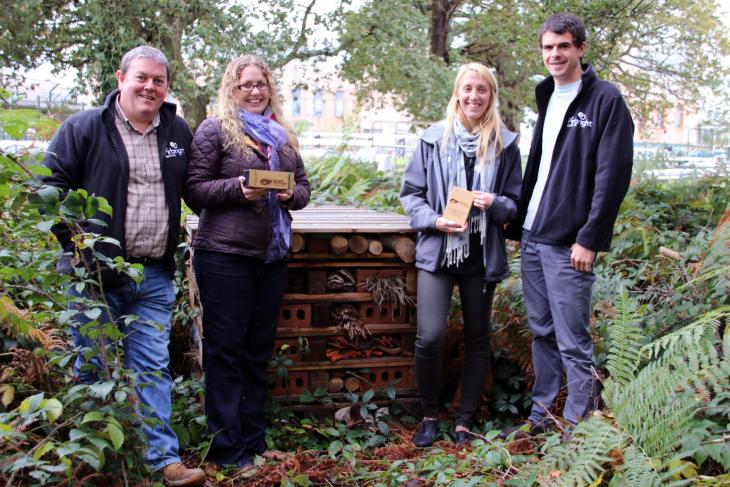 The Pirbright Institute has been recognised for its outstanding commitment to biodiversity by being announced the overall winners at the 2014 CIRIA BIG Challenge Awards which took place at the Royal Botanical Gardens, Kew on Tuesday 14 October. As well as taking home the top prize the Institute also won the Large Scale Permanent category for its ‘Populating and Pollinating Pastures’ project.

The BIG Challenge competition has been developed by CIRIA (Construction Industry Research and Information Association) to show organisations how biodiversity enhancements can be simple, affordable and achievable and how to help make biodiversity mainstream within an organisation.

Major redevelopment works on the Pirbright site, with the construction of new state-of-the-art biocontainment research facilities, has provided the Institute with an opportunity to build on its commitment to biodiversity and improve its environmental impact. Achievements have included the successful capture and relocation of more than 1,000 reptiles from the construction site to carefully chosen receptor sites; the recycling of more than 45,000 tonnes of spoil waste rather than the standard practice of sending to landfill; and more recently the provision of wildlife habitats such a bug hotel and nesting boxes around site.

Areas of land have been specially selected across the Institute’s 300-acre site to encourage the permanent habitation of wildlife along with the implementation of environmental management schedules and planting policies to maintain and monitor all biodiversity enhancements. A Biodiversity Group has also been formed, comprised of volunteers from across the Institute and headed up by Estate Manager Paul Smith.

“We saw The BIG Challenge as an exciting opportunity for The Pirbright Institute to promote its biodiversity on site during the construction phase of our new facilities and we’re delighted to have been honoured by winning these prestigious awards,” said Paul.

“I would like to personally thank our ecology partner AECOM, who provided us with invaluable support and encouragement, and the Institute’s Biodiversity Group volunteers who have been instrumental in making these changes and creating a site rich in biodiversity.”

The competition was extremely fierce with more than 300 case studies submitted by 109 companies nationwide. The Institute fought off stiff competition from some major corporations including Network Rail, Marks & Spencer, Sir Robert McAlpine, and the Environment Agency.