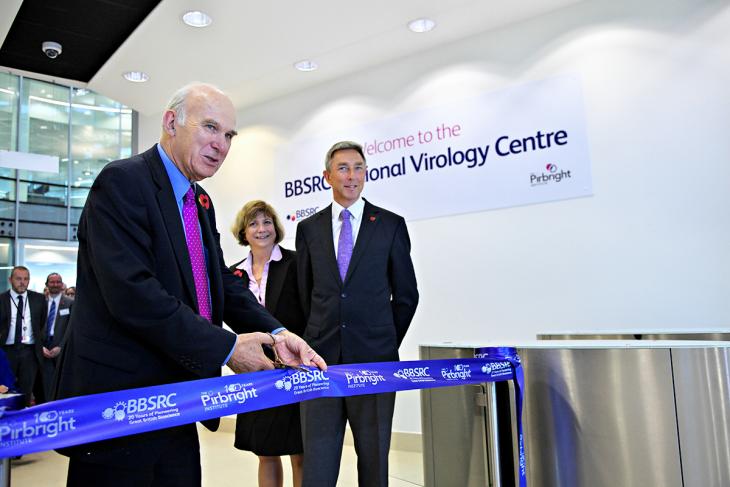 Funded by government via the Biotechnology and Biological Sciences Research Council (BBSRC), the laboratory complex, constructed by Shepherd, uses new, world-leading bio-containment technologies developed specifically for the Institute to enable scientists to study diseases such as bluetongue, foot-and-mouth disease, avian influenza and African swine fever. The new facilities will help to predict and prevent outbreaks and develop vaccines and diagnostics in order to protect the UK from devastating diseases that can affect animals and humans and cost millions to the UK economy.

The Business Secretary also visited the site of a new centre for avian research, currently under construction, which is part of a further £100M+ investment that will ensure the UK has the necessary capabilities to study diseases affecting the rural economy and will contribute to protecting the nation from avian viral diseases such as bird flu.

Business Secretary Vince Cable, said: “Disease spreading from animals to humans isn't a plot from a Hollywood movie. Its results can have devastating impact on our health and the health of the countryside economy. This new centre will help protect both. “Investment like this is why we are designing a long-term science and innovation strategy, which will help British science to keep breaking barriers."

Animal health and welfare research is crucial to our economy and society. scientists at Pirbright played a vital role in saving the nation an estimated £480M and protected 10,000 jobs in the rural economy during the last bluetongue outbreak through their policy advice and forecasting of the disease threat. Pirbright research and surveillance was fundamental in the eradication of rinderpest – a disease that devastated European cattle herds in the early modern period and which until recently destroyed livelihoods and caused great animal welfare problems in Africa. Furthermore, the Institute's combination of innovative research continues to result in new vaccines and diagnostics in partnership with commercial companies, underpinning vital and valuable livestock industries

Professor John Fazakerley, Director, The Pirbright Institute, said: “The BBSRC National Virology Centre is housed in The Plowright Building which we have name in honour of Walter Plowright, who worked at the Institute and developed the vaccine which led to the eradication of rinderpest. Also known as cattle plague, rinderpest is only the second virus to have been eradicated from global circulation after variola virus the causative agent of smallpox.

“The impact of the Institute’s science is global, its facilities and expertise provide a national capability and its work makes a strong contribution to health and economic prosperity in the UK and worldwide. Our new high-containment facilities have an exceptionally high standard of design and finish and will allow us to retain and recruit the very best expertise and continue to deliver high-impact science.”

The construction of the new laboratories to continue this important research involved new technologies and approaches to manage bio-containment. These include a complex network of negative air pressure systems, time-controlled barrier showers, high-tech waste treatment facilities and multiple containment layers of unique construction materials to protect the outside environment. The capabilities developed during the project mean that The Pirbright Institute and construction partner are now world-leading experts in high containment builds with technical leadership that is being sought by other countries.

Professor Jackie Hunter, BBSRC Chief Executive, said: “The BBSRC National Virology Centre will ensure that the UK has the infrastructure to complement The Pirbright Institute’s scientific excellence to better enable the fight against viral diseases that threaten agriculture and animal health, and which could pose a threat to humans. In an era of global trade and climate change the UK cannot rely on its island status to protect us and cutting-edge science and facilities are vital to safeguard against these threats.